Meet Leonard. Barely five years old and already making a difference. Leonard is a business unit that sits inside Vinci, the France-based construction, infrastructure and energy giant. It’s relatively small against the backdrop of the group’s near €50bn (£43bn) a year in revenues, but its mere existence tells you much of what you need to know about the way the company thinks about its business.

Set up and launched in 2017, Leonard provides funding and support to start-ups working on pioneering developments in construction and renewable energy. With its own separate management team, it undertakes research into the latest technologies and processes and also backs ideas put forward by its employees.

Given the implicit reference to the master Italian Renaissance polymath in Vinci’s name, by rights this unit should probably be called Leonardo. 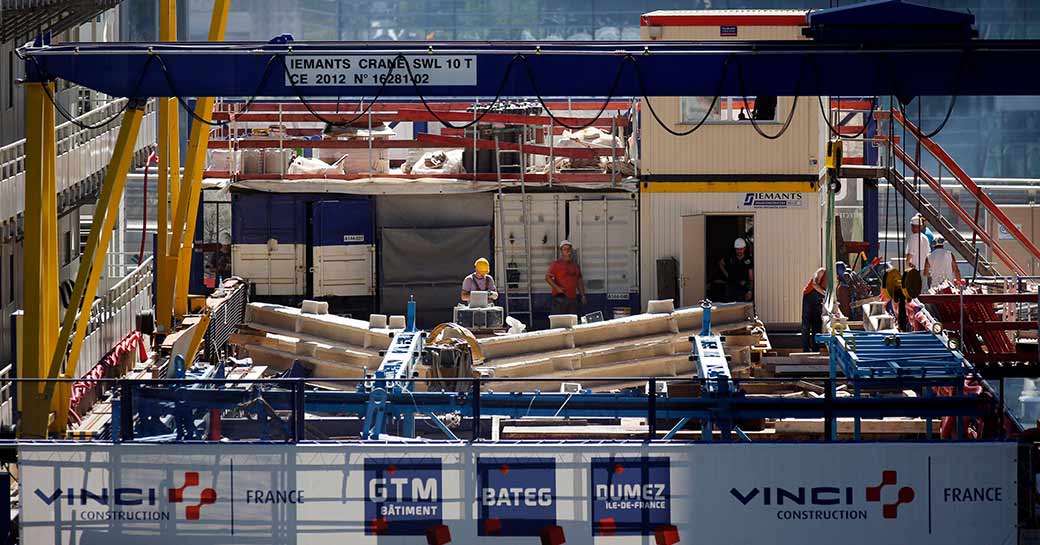 Vinci traces its origins back to 1899, when two French engineers founded Société Générale d’Entreprises. Having completed a series of acquisitions, the enlarged company was itself bought by Compagnie Générale des Eaux, which subsequently grew into the sprawling empire known as Vivendi.

In 2000, as Vivendi was poised to spiral into a period of crisis and record losses, the conglomerate spun out its SGE property and construction business, which immediately merged with Groupe GTM, and the new company’s name was changed to Vinci. (GTM, formerly Grands Travaux de Marseille, was created in 1891 to provide the southern French city with a state-of-the-art sewage system.)

In its modern form, Vinci is still built around its core businesses of concessions and construction, which together accounted for just over two-thirds of the group’s revenues last year. In a concession, rather than just agreeing a contract to build say, a motorway, the company might also be granted the right to own and operate it, benefiting from toll charges, maintenance contracts and potentially other revenue streams.

For investors, not only does this diversify income, but it also avoids much of the traditional hazards of the construction sector – being stuck with low-margin contracts, and high up-front and running costs, all of which make it easy for a business to become loss-making.

In part as a result of the success of this model, and partly thanks to acquisitions, Vinci is now involved in every conceivable type of city and transport infrastructure, from autoroutes and high-speed railways, to hospitals, shops and offices, as well as bridges, tunnels and dams. It also designs and builds infrastructure for energy and water, a rapidly growing part of the group.

As a construction business, and as the builder and operator of transport and energy infrastructure, Vinci is exposed to a string of Fix the Future themes, mainly linked to developing social and demographic trends and environmental and climate change.

As populations move, relocate and urbanise, they might travel on roads, railways or to and from airports and stations built by this company and others like it. Could they come to live in cities that Vinci has had a hand in designing and developing, underpinned by energy and water systems that it has engineered?

Vinci’s commitment to sustainability – which includes using fewer natural resources, recycling materials and promoting the transition to clean energy – also locks it into the Fix the Future theme of climate defence. The group has committed to safeguarding the environments it works in, including by conserving natural resources and protecting biodiversity.

There are plenty of potential holes in this idealised winning formula, of course. Lest we forget, Vinci manages, and to varying extents, owns, some 52 airports, including London Gatwick Airport in the UK and Nantes Atlantiques in France.

These are environmentally problematic, given the polluting air travel that they facilitate, though in fairness to the group, it has undertaken several initiatives as part of its commitment to halve emissions at its airports by 2030 and achieve net-zero by 2050. These include electrifying its fleet of vehicles at Gatwick, offering sustainable aviation fuel for planes on some flights, and investing in efforts to develop clean hydrogen, a potential game-changer for air travel.

Vinci is held by 17 elite fund managers, including several with a focus on environmental, social and governance issues. Many of the funds are US based, but there is also a smattering of European holders, including Groupama Asset Management and Allianz Global Investors. 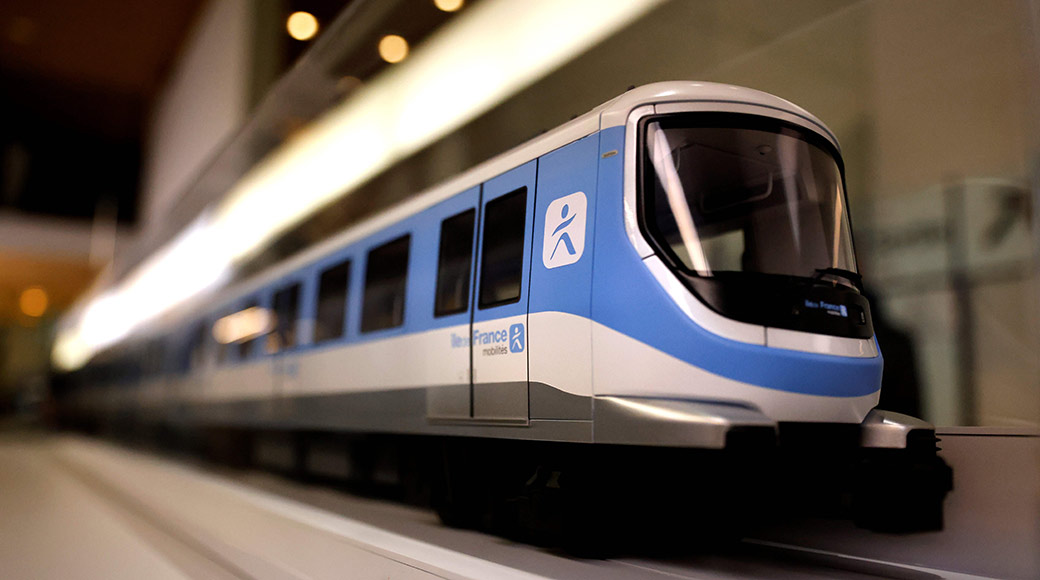 A scale model of a future Grand Paris underground train

One of Vinci’s most prestigious current endeavours is its work on the Grand Paris Express project, arguably the biggest transport initiative in Europe. Begun in 2016 and due to complete in 2030, it involves the creation of four new train lines, including one that entirely encircles the French capital.

In total, 200km of new track will be laid and 68 new stations built, creating a transport network capable of transporting two million passengers a day, with a train scheduled to run every two to three minutes.

The Grand Paris Express, 90% of which will use underground lines, is in part designed to speed up travel times and improve connections with Paris’s three airports. But the project is much more ambitious in scope than that. The idea is that the stations will be architecturally significant and places where people can live, work and shop as well as travel. The project is also designed to prompt investment in some of Paris’s poorer, more deprived areas, attracting business, housing developments and supporting local jobs.

Vinci has won numerous contracts relating to the project, including to build three overhead stations on a viaduct that will carry the future Line 18. It has also won a contract to build an 11.8km tunnel section of Line 18 and a 6.7km section of the viaduct. The group says it has mobilised every part of its operations in readiness for future contract wins.

The construction sector has been full of peril for investors in recent years – capital intensive, highly indebted, low margin, with shaky dividends and unpredictable project spending from the public and private sectors alike.

The good news about Vinci is that it is better insulated against these vagaries than most, and it is also more diverse. On the metrics that tend to be used to assess companies in this sector – debts, free cashflow, operating profit and the health of the order book – the group seems robust.

While its debts of €19.7bn, according to broker consensus estimates, are on the face of it high, Vinci’s leverage, or gearing, is manageably low, suggesting it should be able to handle interest payments. The group’s borrowings equate to less than three times its Ebitda, which doesn’t set off alarm bells that debts might be its undoing.

Last year, the group generated a record €4.6bn of free cashflow – the money it has left after its capital expenditure and operating expenses – in a further sign of its financial resilience. Last year’s operating profits bounced back from 2020’s Covid-induced trauma – when airports shut and construction projects ground to a halt – but were still around €1bn below their pre-pandemic levels.

Vinci’s Airports have been loss-making for each of the past two years but the company is hopeful that they should soon be breaking even, assuming that passenger traffic returns to 60% of its 2019 level.

A book of forward orders worth €44.5bn last year – and that’s before taking into account Vinci’s €4.9bn acquisition of the Cobra IS energy infrastructure business – is more than a fifth higher than it was in 2019. Its construction division’s pre-tax profit margin of 3.7% is its highest in at least five years.

That’s not the whole picture, however. The nature of concessions – the receipt of toll charges or a share of a project’s earnings – should mean they generate a steady stream of reliable income, which tends to be good news for shareholder dividends.

In theory, concessions should also be more profitable, certainly than construction. Last year Ebitda margins reached 74.2% for its autoroutes division, 32.4% for airports and 56.7% for highways, railways and other concessions. That compares with 6.3% for construction over the same period, so the theory seems to bear out.

There are other attractive aspects of Vinci’s revenues: they should, for example, help to shield investors from the otherwise corrosive impact of rising prices. As Alexandra Annecke, an elite investor in the business through her UniValueFonds: Europa fund says: ‘Vinci’s business model offers some inflation protection through its infrastructure business. Vinci, for example, operates toll roads – the revenues from which are usually regularly adjusted for inflation.’

The group ought to be able to pass on much of the other effects of inflation, such as rising raw materials costs, to its customers.

Vinci has performed solidly for its investors in recent years. The shares have consistently outperformed France’s leading share index, the CAC 40, since 2015, but are nevertheless still reasonably valued.

The stock has been priced at an average of just under 21 times earnings over the past five years and the dividend yield on the shares has averaged 2.9% over the same timeframe. And the overall market capitalisation of the business is equivalent to a touch more than its annual sales and just over 10 times its most recent annual operating profit. That doesn’t feel too rich.

But back to Leonard, the unit that symbolises how Vinci views itself. Why? Most fundamentally, because Leonard is forward-looking, and engaged in sustainability. The group is thinking about what the world, and its own markets, will look like in the decades to come and trying to position itself accordingly.

Its target of reducing its direct and indirect (Scope 1 and 2) emissions by 40% by 2030 against 2018 levels is a punchy one, particularly given the intensity of the construction, transport and infrastructure sectors in churning out greenhouse gases.

The group’s aim of promoting the circular economy, including by backing greener construction techniques, is also laudable, particularly as it extends across its supply chain.

And its commitment to social cohesion, including by helping to get excluded parts of the population back into the jobs market, is also to be applauded – at a group that employs more than 100,000 in France alone and supports 2% of the country’s total jobs.

Vinci may well be playing its part in fixing the future, but it is definitely making a success out of the job of building it.

Which Type of Holiday House Rental Should You Stay In?