Time for a little truck history. The Ford Courier was a compact truck that sprang up in the 1970s following a partnership between Ford and Mazda. Compact trucks seemed to be everywhere in Southern California in the ’80s. Maybe where you grew up too. I learned to drive in one.

Of course, a bigger is better mentality in terms of trucks and profit margins eventually pushed out pint-size pickups and paved the way for midsize trucks alongside a growing lineup of full-size models. Pickup size and prices continued to grow leaving both fleets and consumers longing for a smaller truck that would get the job done without breaking the bank.

Enter the 2022 Ford Maverick. The model name once reserved for Ford’s compact sedan of the ’70s was brought back for their compact pickup. It’s a good name since the Maverick is an unorthodox pickup that’s not only fun to drive, it’s also an impressive workhorse. 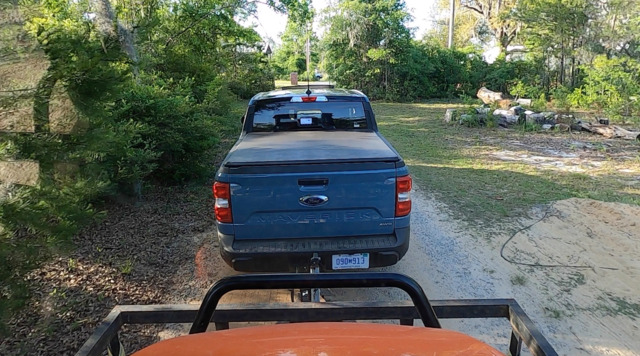 When equipped with Ford’s 2.0-liter EcoBoost, Maverick can tow up to 4,000 lbs. The hybrid is rated at 2,000 lbs. towing.Tom QuimbyKnowing where to start when reviewing it is a little tricky. It’s an unusual pickup in a lot of ways: it’s a sporty workhorse with broad appeal from old timers to first-time car owners; hybrid comes standard; unusual unibody construction (a first for a Ford truck); available all-wheel drive; a versatile bed; and of course, we’re talking about the resurrection of the compact pickup, which may seem a little odd since bigger trucks with more power seem to get all the love.

But then again, things change. Dad’s 1975 Cadillac El Dorado with a monster 500-cubic-inch V8 was eventually sidelined by GM for a smaller and more nimble model, which wasn’t such a chore to park and could pass up gas stations without wheezing and begging for fuel.

Now, I’m not saying that compact pickups are signaling the demise of big pickups. I think they’re far too popular than that. What it looks like here is that the pickup market is strong enough to support a return to compact and capable trucks at an affordable entry point, especially the Maverick. The timing also couldn’t be much better for a fuel-sipping pickup as gas prices keep soaring.

Impressive power while maxing out the Maverick

The Maverick that Ford had delivered to us in Panama City, Florida was a Lariat First Edition with a 2.0-liter EcoBoost. The hybrid version was not available. Admittedly, I was disappointed at first, but in the end, I was absolutely fine with the non-hybrid version since it provided the opportunity to do some towing with the 16-foot flatbed. I couldn’t have done that with the hybrid since the weight of the flatbed alone would have nearly maxed out towing.

I understand that max towing in a small truck like the Maverick sounds a little sketchy at first. You can’t help but think of the tail wagging the dog. Except in this case, the tail was a tandem-axle flatbed loaded down with a Kubota RTV-X1140, which brought the entire load to just shy of 4,000 pounds. 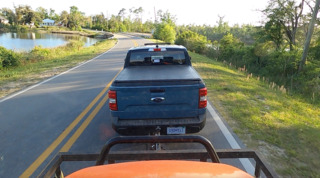 After hooking up the flatbed and loading up the Kubota RTV X1140, I selected tow/haul mode and hit the road. Maverick easily handled the 4,000 lb. load as fuel economy dropped from 25 mpg to around 11 according to Maverick’s numbers. That’s still double-digit results while maxing out on towing. Impressed!Tom QuimbyWhen first hooking up the trailer, I expected the back end of the truck to drop substantially under the load. It didn’t. The bed sank about a half inch or so, and that wasn’t for lack of tongue weight.

After plugging in the trailer harness, the truck detected the trailer, but it did not suggest tow/haul mode. Not a deal breaker, just an observation. Bottom line, Maverick handled the load impressively on dirt, on city roads and on highway.

The big test would be the highway. In brisk traffic, Maverick got up to speed fast – in this case 65 mph – and held it well in cruise control while towing the Kubota.

Braking at a few red lights along the way came easily. The truck maintained control of the large load while having to drop down quickly from highway speeds to a standstill.

After stopping to fuel up – not exactly my favorite thing to do while towing – it was easy driving around another set of pumps and some trucks to exit the busy station. That’s one of the benefits of using a smaller truck. It’s more nimble in tight spaces. More on that later.

The downside of tow mode is that the engine runs at higher RPMs, which eats into fuel economy. Per Maverick’s numbers, 25 MPG combined dropped fast to 11 MPG. Still, that’s double-digit fuel economy while towing at max load.

Though Maverick’s max towing can’t come close to a half-ton – in a lot of cases, it won’t need to. There are plenty of commercial pickups that don’t tow that often, or when they do, they won’t require max towing. Parts runners and pest control come to mind.

As far as payload, the Maverick’s small 4.5-foot-long bed can act like a big boy, thanks to an adjustable tailgate. Just lower the gate and reposition the cables to keep the tailgate at an angle, which serves to prop up 4-foot by 8-foot sheets of plywood.

I used the bed to haul 50-pound bags of fertilizer, tomato cages and some buckets (growing tomato plants in buckets eliminates the nematode threat so prevalent in Florida’s sandy soil). The tonneau cover keeps the rain off and can be folded forward and secured for bigger loads. The spray-in bed liner offers additional protection.

I like the adjustable cleats in the bed rails. I slid one down to tie off the cages before hitting the road from my local home improvement store. More tie-down points can be accessed along the bed floor and walls. With 10 tie-down points, there’s no reason not to have a secure load.

Payload is rated at 1,500 pounds. I can’t say that I loaded the bed down completely to reach that weight, but I did work it enough to appreciate its capability.

Yes, we’re seeing QR codes just about everywhere, and that includes Maverick’s truck bed. Just scan it to see ideas for framing out the bed, which comes easy thanks to notches for both 2x4s and 2x6s.

What I don’t like about the bed is that the tailgate is not dampened. For the $35,000 Lariat First Edition, you really shouldn’t be subjected to tailgate slam. It sounds like an old truck when it drops down and cheapens the experience. Hopefully they’ll dampen the tailgate next year.

Life inside the Maverick

The Maverick’s cab is unlike any other pickup I’ve seen. A lot of thought went into creatively utilizing a smaller cab and providing a next-level pickup experience on such a small budget.

It doesn’t feel cheap. It feels practical, well thought-out, even a little sophisticated. This is the Lariat trim level after all.

Desert brown trim works well inside along with ActiveX Seating, which looks and feels like leather but offers the durability of a synthetic.

The 8-inch center stack touchscreen is perched prominently on the dash and offers quick access to mapping, sound and connectivity management including the Alexa-supported Ford Sync 3 infotainment system that comes with Lariat. 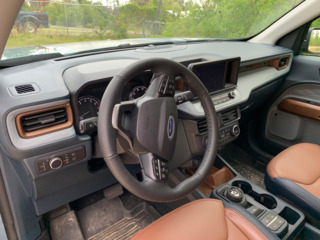 Hop in and go! Don’t mind the dirt. Maverick muscled up and went to work during its recent stay in Panama City, Fla. The Maverick Lariat First Edition with Ford Co-Pilot360 and 500A equipment package stickers at $35,800. Desert brown trim with ActiveX seats shown here.Tom QuimbyThe eight-speaker B&O sound system delivers some of the best audio quality I’ve heard in a pickup regardless of size. A discreetly mounted subwoofer and amp behind the rear seat once again speaks to the clever use of space.

On that note, storage opportunities are found nearly everywhere in the little truck. Sectioned space under the rear seat is the most impressive followed by the center console, small cubbies in and below the dash and well-designed door pockets that allow for tall, skinny water bottles.

When driving with family, it felt cozy not cramped so long as the occupant in the right front seat was nice enough to inch forward for a growing sibling in the back.

The optional moonroof and standard sliding rear window help open up the cab a little more and make it feel a little less crowded on those days when the family piles in.

The truck’s unibody design and independent rear suspension make for a smooth, fun ride. It’s the kind of pickup that you’re happy to slip into and just drive without fretting over the need for battleship-like clearance that comes with larger trucks.

Of the five drive modes that Maverik offers, sport is by far my favorite. The eight-speed transmission becomes more eager to put those 250 horses to work. Even with all-wheel-drive, I got a little bark out of the tires when I floored it on asphalt. True, it’s a compact truck and it doesn’t take much to launch it — and, man, is it fun. While I can’t speak to the hybrid’s capabilities, the 2.0-liter EcoBoost in Maverick is exciting to drive, and I didn’t expect that. Ripping out doughnuts while off-roading cranked up my respect for this little dynamo even more.

Maverick’s off-road performance gets even better with an upgrade to the FX4 Off-Road package, which comes with sand and mud & ruts modes. Even without the FX4 package, Maverick Lariat easily handled the bumps and dips in our off-road course.

Checking a lot of boxes 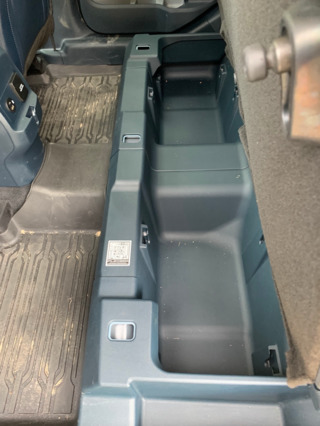 More storage under the rear seat. Notice dual USB charge ports and conventional 12-volt round plug to keep devices juiced up.Tom QuimbyTruck needs often revolve around towing and payload capacities. If we do any serious towing around here, we’ll opt for one of our full-size trucks, but the 2.0-liter Maverick still proved impressive while towing around a 4,000-pound big boy flatbed.

I didn’t expect either myself or my kids to be won over so quickly by Maverick. We’re used to full-size trucks that offer plenty of power and creature comforts. The Maverick Lariat does that on a smaller scale, which brings me to my next point: accessibility.

I’ll often use a golf cart to get around on the property since it’s easier to drive around the trees. With the Maverick, I didn’t hesitate to weave in out of the orchard and deliver a load of supplies to the garden. I wouldn’t do that with my full-size truck.

Another nice surprise was Ford Co-Pilot 360. I’m still getting accustomed to autonomous driving features, and Ford makes it easy. The system kept the truck within its lane and worked the throttle and brake when needed to keep a safe following distance in traffic. Just keep both hands on the wheel; otherwise, the system will disengage.

Safety features today are tantamount, especially for fleets that can be hit with nuclear verdicts following devastating accidents. To help keep safety a priority, Maverick comes standard with pre-collision assist with automated emergency braking and a rearview camera to keep a close eye on life behind the truck. Headlights feature auto on/off and auto high beam. A tire-pressure monitoring system keeps a close eye on tire pressure.

Maverick is a newcomer and as such we’ll have to see how durability plays out. In the meantime, we’re impressed with the capability and comfort this compact has to offer. 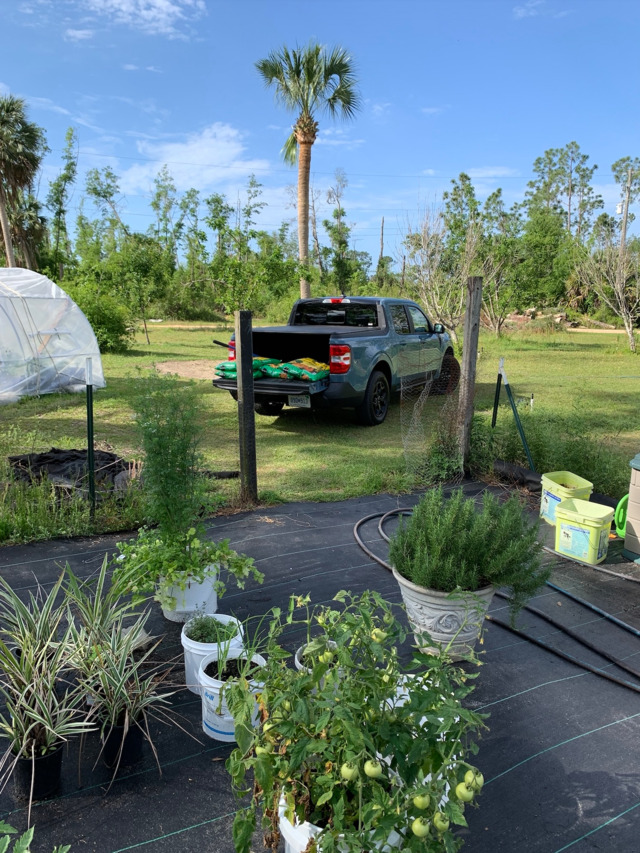 Maverick’s compact size makes it easy to drive through the orchard to the garden.Tom Quimby 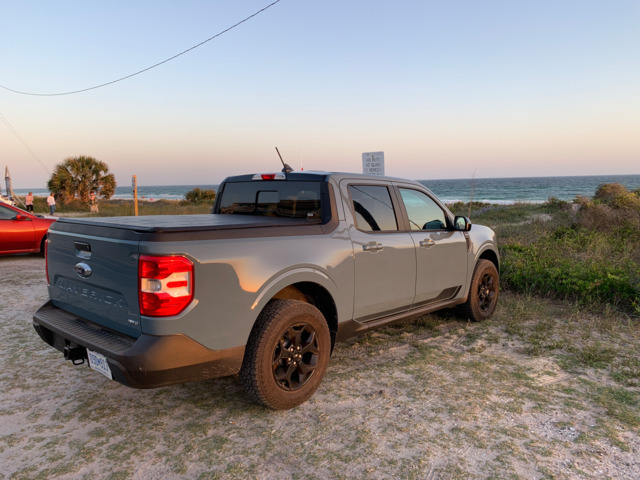 Local Handyman Services: Choosing the Right One for You